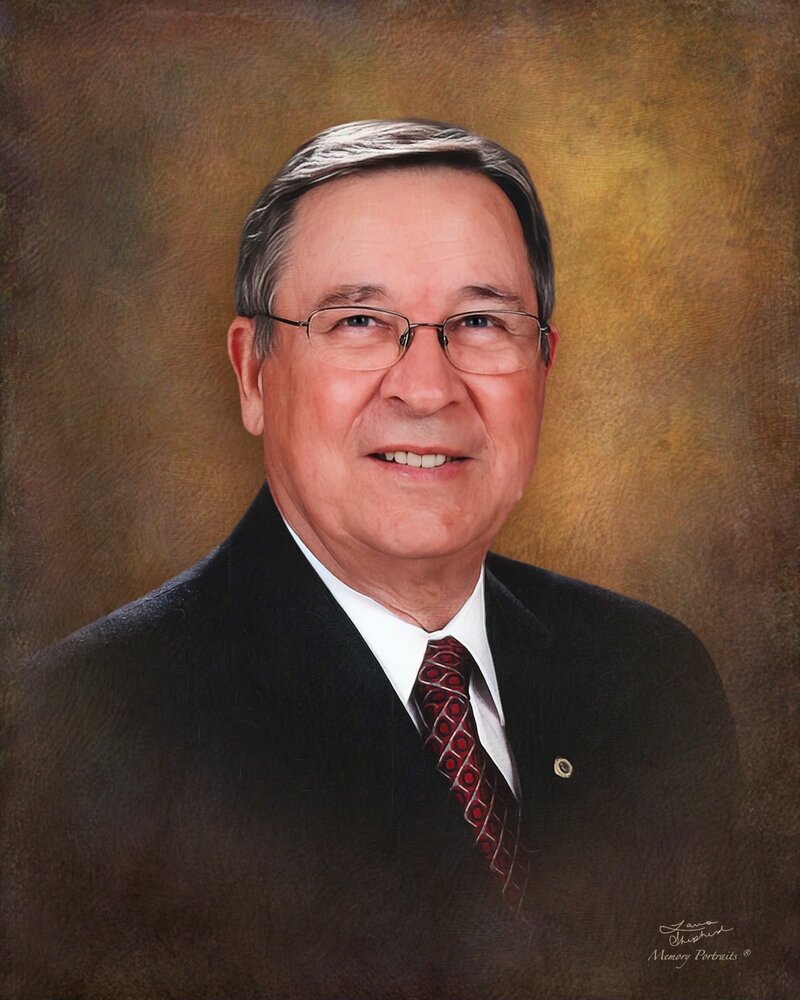 Please share a memory of Franklin to include in a keepsake book for family and friends.
View Tribute Book
Franklin Roosevelt Ward, husband of Jacqueline (Jackie) Cooper Ward, of Georgetown, SC, a longtime businessman and community leader, was born in Williamsburg County, SC on November 10, 1932, a son of the late Sampson Ward and Louise Barrineau Ward. He grew up in Williamsburg County, the youngest of nine children, and was a graduate of Williamsburg High School Class of 1954. He moved to Georgetown with his wife after serving in the United States Army for two years and began a 15-year career as advertising manager of The Georgetown Times. In 1974, he opened, as co-owner and manager, Regal Printing and Office Supplies, Inc., later merging to form Custom Printing and Office Supplies, Inc. He retired in 2001. A memorial service will be held on Thursday, October 20, 2022, at 11AM at Wayne United Methodist Church. The family will receive friends one hour prior to the service from 10AM-11AM. Mr. Ward was a member of Wayne United Methodist Church and served the church in various capacities, including Chairperson of the Administrative Board, Church Council, Finance Committee, and Pastor-Parish Relations Committee. He was a member of the Barnes Sunday School Class and the Men’s Club, where he served as President of both. He served as the Maryville School PTO president for three years and served on the City School Advisory Board for eight years, three of which he was Chairman. He was elected to the Georgetown County School Board and served a four-year term. He held a seat on the City Planning and Zoning Commission where he served a total of sixteen years. Mr. Ward was a member of the Georgetown Lions Club and was presented the highest award in Lionism, the Melvin Jones Award, and the Dr. Franklin G. Mason Fellow Award. He served as President of the Club for two terms, held various other offices and was awarded a Lifetime Membership in the Club in 1997. He was a past President of the Georgetown County Chamber of Commerce and was the first Chairperson of the newly formed Downtown Georgetown Revitalization Association, serving in this capacity for three years. During his chairmanship, he worked with fellow members and downtown merchants to solicit funds from private and public sectors to begin what is now the beautiful Georgetown Downtown Waterfront Boardwalk. Surviving are his wife of 67 years, Jacqueline C. Ward, two sons, Franklin Dennis Ward and his wife, Lisa P. Ward, of Georgetown, SC and Kevin Lee Ward and his wife, Kendall G. Ward, of Pawleys Island SC; three grandchildren, Kellie Elizabeth Moxley (Hunter), Cameron Lee Ward and Carson Franklin Ward; a step granddaughter, Kayla Mau and Darren Patternot; two great-grandchildren, Preston and Baylor; four step-great grandchildren, Tanner, Paxton, Macey and Cameron; a sister-in-law, Rosie Ward, and a number of nieces and nephews. In addition to his parents, Franklin was predeceased by his sisters, and their spouses, Tinker Ward Pierce (Thomas), and Virginia Mae W. Cooper (Harold), and his brothers and their spouses, Lofton Woodrow Ward (Margaret and Lonita), Levy Bryant Ward (Jeanette), Walter Raymond Ward (Lena Mae), William Lewis Ward (Oneta), Edwin Norman Ward and Phillip Julian Ward (Joyce), his nieces, Susan Ward and Tricia Harrington, and his nephew, David Ward. Franklin’s family would like to thank the employees of Tidelands Community Hospice, First Light Home Care, and “Special” Caregivers, Lisa Carl, Robin Glass, and Anna Bates for the compassionate care given to him. In lieu of flowers, memorials may be made in his memory to Wayne United Methodist Church, Building Fund, 621 Wayne Street, Georgetown SC 29440, Epworth Children’s Home at 2900 Millwood Avenue, Columbia SC 29205, or to the charity of one’s choice. Online condolences may be sent to the family at www.grahamfuneralhome.org. Arrangements entrusted to Graham Funeral Home (843) 527-4419.
To send flowers to the family or plant a tree in memory of Franklin Ward, please visit Tribute Store
Thursday
20
October