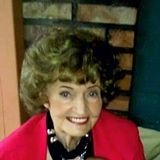 Please share a memory of Lily to include in a keepsake book for family and friends.
View Tribute Book

Lily was born on May 13, 1929 in Virgie, Kentucky.  She was the daughter of the late Alvin Hall and Flora Dixie (Tackett) Hall.

Lily proudly served her family as a homemaker all her life and was a very proud Appalachian Mountains woman.

Lily’s passion was her family, Facebook, gardening, and trips to Myrtle Beach to be with her daughter and family.  Above all, she cherished her family and treasured all the time spent with them.

In honoring Lily’s wishes, there will be no visitation or calling hours observed. Interment will be at a later date at the Marion Cemetery, Marion, Ohio.

To plant a beautiful memorial tree in memory of Lily Martin, please visit our Tree Store

Look inside to read what others have shared
Family and friends are coming together online to create a special keepsake. Every memory left on the online obituary will be automatically included in this book.
View Tribute Book
Services for Lily Martin
There are no events scheduled. You can still show your support by planting a tree in memory of Lily Martin.
Plant a tree in memory of Lily
Share A Memory
Plant a Tree