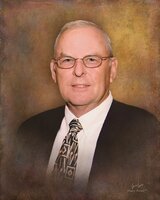 George Mosley Dugan, 74, husband of Ruthie B. Dugan, passed away on Thursday, December 16, 2021 at his home surrounded by family and friends. A memorial service will be held on Saturday, December 18, 2021 at 4PM at Herbert United Memorial Methodist Church. The family will receive friends prior to the service from 2:30PM-4PM. Mr. Dugan was born in Abbeville, SC to the late Houston Virgil Dugan and the late Evelyn Gertrude Mundy Dugan on June 23, 1947. He was a devoted member of Herbert Memorial United Methodist Church and attended the Stullenbarger Sunday School Class and United Methodist Men. He spent much of his adult life serving as a missionary both in the United States and abroad. Mr. Dugan was a United States Army Veteran who served a tour in Vietnam and a member of the local VFW Post #6444. Mr. Dugan was a loving husband, father, and grandfather who will be dearly missed. In addition to his wife, Mr. Dugan is survived by a daughter, Amanda Scogin (Scott) of Georgetown, SC; a son, George B. Dugan (Emilé) of Hawaii; three grandchildren, Austin Scogin, Alex Scogin, and Haley Scogin; two brothers, Virgil Dugan (Virginia) and Lewis Dugan (Debbie). Online condolences may be sent to the family at www.grahamfuneralhome.org. Arrangements entrusted to Graham Funeral Home (843) 527-4419.