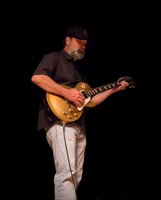 Bradley Ward Freeman “Brad”, 46, husband of Bianca R. Freeman, passed away peacefully surrounded by family and friends on December 12, 2021 at Tidelands Georgetown Memorial Hospital. A memorial service, officiated by Reverend Danny Chamblee, will be held on Wednesday, December 15, 2021 at 5:30PM at Winyah Auditorium at 1200 Highmarket Street Georgetown, SC 29440. The family would love if everyone would honor Brad’s easy-going spirit by keeping their attire casual. Brad was born in Georgetown on May 25, 1975 to Stuart Allen “Al” Freeman and Edna Ward Freeman. He was a graduate of Georgetown High School and Clemson University. He was an avid Clemson Tigers fan and former owner of Backstage Café. Brad was an old soul who loved music and supporting his community. He was a Winyah Auditorium board member and invested so much of himself to bring local music to Georgetown. Brad loved Pawleys Island and his summers growing up on the beach. He spent many summer days on the beach with his family and friends. Brad was the most amazing husband, father, brother, son, uncle, and friend anyone could ask for and his bright smile, charming wit, and heartwarming laugh will be missed endlessly by so many. Surviving, in addition to his parents and wife of seven years, are three daughters, Greyson Freeman of Clemson, Anna Freeman of Georgetown, and Sagel “Ellie” Springs of Georgetown; one brother, Allen Freeman (Jenny) of Georgetown; two sisters, Robin Kirtley (Chris) of Georgetown; Lori Bellune (Tom) of Georgetown; five nephews, Luke Freeman (Emily), Will Bellune (Amelia), Bret Kirtley, Stuart Bellune, Jasper Rogers; two nieces, Kaitlin Bellune and Alaia Rogers; a brother-in-law, Dylan Rogers (Lauren) of New York; one uncle, Gerald Freeman (Charlene); three aunts, Dean Lewis (Mike), Barbara W. Mishoe, Becky Ward Curtis; and numerous extended family and friends. Brad was preceded in death by a niece, Christen Kirtley and two uncles, Roger Ward and Neil Mishoe. Online condolences may be sent to the family at www.grahamfuneralhome.org. In lieu of flowers, the family requests that memorials be made to the Brad Freeman Memorial Fund at South Atlantic Bank at 1187 N. Fraser Street Georgetown, SC 29440 so that Brad’s family can continue his legacy of bringing music to Georgetown. Save us a seat Brad…we love you.