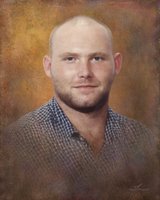 Sean Michael Osburn, 39, husband of Lisa Miller Osburn, passed away peacefully in his home surrounded by family Wednesday, April 22, 2020. Born July 17, 1980 in Sandusky, Ohio, he was the son of Mrs. Francine Neruda Osburn and Mr. Terry Osburn. Mr. Osburn was a unique individual that lived his life and did things “his way”. He was a tough man, but a very loving husband and father that loved to work and support his family. Sean was always the first person to step in and help someone in need constantly volunteering to help friends, family, customers, and even complete strangers. Mr. Osburn had two dreams in life that he was able to see come to fruition. The first, and most important dream was that of being a good father. The second dream of his was to start his own company. He realized that dream by building Osburn Moving Company. Surviving in addition to his wife and parents are his step father, John Lenhart; five daughters, Hannah Osburn of Ohio, Summer Smith of Kansas, Faith Miller of Ohio, Caitlin Osburn of Andrews and Willow Osburn of Andrews; four sons, Brandon Miller and his wife Montana of Ohio, Austin Osburn of Andrews, Jaxson Osburn of Andrews, and Sean “SJ” Osburn, Jr. of Andrews; one sister, Stacey Hayes and her husband James of Ohio; nephews, James Hayes and his wife Mary Beth of Tennessee, Jacob Hayes of Ohio, Joseph Hayes of Ohio, Noah Miller of Monks Corner, Caleb Miller of Monks Corner, Brian Miller of Monks Corner, and a host of other relatives and friends. Mr. Osburn was preceded in death by his mother in law, Marcia Miller Rickley, his paternal grandparents, Norris and Mary Osburn, his maternal grandmother, Mary Neruda, and an uncle, Gregory Neruda. Due to the current COVID-19 restrictions being placed on funerals and other public gatherings for public safety, funeral services will be private. A public memorial service will be announced at a later date once it has been deemed safe for larger groups. In lieu of flowers, memorials may be made to Relay for Life or St. Jude Children’s Research Hospital. Online condolences may be made at www.grahamfuneralhome.org. Arrangements by Graham Funeral Home, (843) 527-4419.