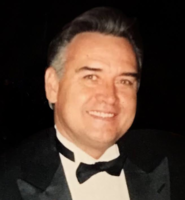 Born in Columbus, Ohio on July 5, 1948, he was a son of the Viola Rebecca Swank Bond and the late Louis Henry Smith.

Mr. Smith was a kid at heart who had the best-looking grass in the neighborhood.  He loved the outdoors, tinkering in the garage and spending time with his family and friends.

In addition to his father, he was preceded in death by a brother, Richard Smith.

A private funeral service will be held at Spence-Miller Funeral Home in Grove City, Ohio.